Adoption, the Gospel, and Fairness

Nearly 2 years ago I received a call from my wife that I had received many times before. She told me that DYFS called and they want to place a foster child in our home.  We’ve said ‘yes’ to 7 children previously, but this one seemed different.  4 month old baby boy.  Undernourished.  Almost definite we could adopt if we wanted to – truth be told, we had been hoping we’d find a child we could adopt someday. We said yes immediately.

As I drove home from work that day, I was anticipating a cute, cuddly baby boy.  When I walked in the door and saw him, I was shocked.  Sticks for legs and arms, oversized head, sunken eyeballs.  I was angry…I was trying to not be self-righteously angry.  “How could anyone starve a child in this day and age?”

Baby S quickly started to thrive, mostly because of my wife’s status as a SuperMom.  We started our journey with him – as he started to grow and change.  His smiles, his laughs, his first crawling (more like Army crawling/sliding/dragging), first standing up, first walking, first foods…first words. His obsession with balloons and YouTube Kids. The “not-so-fun” stuff like poop filled diapers, a seemingly constant need for schedule modifications and baby sitters, the countless nights of interrupted sleep, screaming, dinners with friends cut short by projectile vomiting, an awesome case of coxsackie virus on vacation…and the introduction of the full blown 2-year old fit when you do not draw the letter “S” to his exact requirements, or “dit” (sit) when and where he’d like you to. In all that he became our son.  A part of our family.  He had a brother and a sister, grandparents, pets…and an extended family at church that adored him. 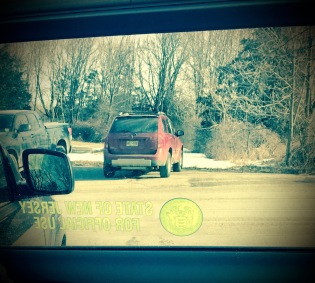 Now, 2 years later we held each other as the DYFS van came back, this time to take him away and reunite him with his birth parents. I snapped this picture standing with the van door open in the awkward, and seeming 45 minutes (in reality probably 2 minutes) it took the driver to strap S into his carseat, while Mel and I cried our eyes out. I didn’t know what else to do, I felt stupid for just standing there. The “impossible” had happened, and it seemed to happen fast.  The trajectory turned quickly from adoption, to him being removed from us and reunited with the situation that put him with us in the first place. Shock.  Pain.  Loss of words. Anger. Disbelief. Fear of the future. Then today…just numbness and grief.  I haven’t cried that hard in a long time.

The thing that comes to mind most often is “this isn’t fair.”  And that would be correct – but it points to a greater truth.  This world isn’t fair.  It’s broken.  It’s chock full of unfairness.  It’s that way because of sin.  We were all created to be in perfect relationship with our good and perfect Heavenly Father, but we chose to reject him – and in so doing fractured the perfection of this world and opened the door for sin, pain, hurt, sickness, unfairness to charge in and take over.

But there is a greater reality that sin hasn’t taken over completely – because it can’t.  Our loving Heavenly Father knew that we would reject him, and despite the stupidity of our choice, he had a plan that he enacted at the perfect time to reconcile us, forgive us, heal us, and conquer sin and unfairness, forever.

Today, we receive this thru repentance and faith.  We turn (repent) from our choice to reject God, and believe (faith) in the person of His Son, Jesus Christ, to he sent to absorb his full wrath for our sinful choice on the cross.  He then was resurrected from the dead to prove that the sacrifice was accepted and also to allow us to be united with him in new life.  We live this new life here on earth by his power, and one day he will return to permanently banish sin, sickness, unfairness, and death.

While human relationships will always be flawed and full of sin, and occasional unfairness – thru Jesus our relationship with God can be one of perfect grace, healing, hope, and fairness.

While we won’t always know why things happen, we do know that God is always good and always fair, most profoundly because of what he demonstrated to us in the cross of Jesus.  Fairness in treating sin the way it needs to be treated, and overwhelming grace to give us something far above we could ever earn.

So in that, we press forward.

“He who did not spare his own Son but gave him up for us all, how will he not also with him graciously give us all things?”

6 thoughts on “Adoption, the Gospel, and Fairness”