Being a church planter the most frequently asked question is “What kind of church are  you?”  [READ:  “Are you a legit church or a cult?”]  Being a Non-Denom in the overwhelmingly Catholic Northeast US, people are naturally suspicious.  I get it.  Even within our small town there are several other churches, mainline denominations that, to be blunt, are preaching a false gospel.  How are we to relate to each other?  What does the unbelieving world see in all that?

As we celebrate the 500th anniversary of the reformation this month we are forever thankful for the return to biblical doctrine over church corruption, the inescapable question is “To what extent has unity suffered?”

Luder Whitlock tries to address all of these questions in “Divided We Fall – Overcoming a History of Christian Disunity.”  [P&R Publishing, 2017] 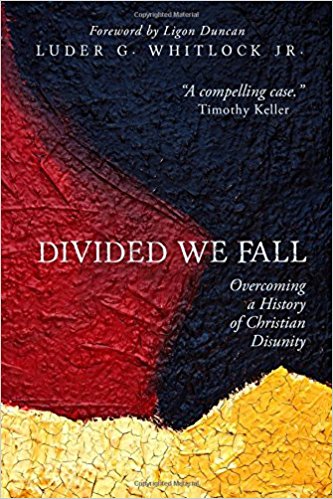 I’m very thankful for this book, and in reading this was encouraged by the way God works in our hearts to grow us, as this topic has been something that I’ve been wrestling with.

As one might expect, Luder starts with a solid foundation of what the Bible has to say, as does church history, and then moves towards more practical application.

In the perfect unity of the Trinity, God is completely harmonious.  When we draw near to this God, and our relationship with him is restored in Christ, our relationships with people will inevitably be transformed. [7]

I echo Luder’s concerns that unity has been been considered less important in the church to our shame.  “Given such an undeniably clear emphasis by Jesus on the importance of unity, how can his people afford to neglect it or treat is lightly?” [15] Hence the need for a book like this.

The author traces church history, again focusing on the Protestant Reformation, but notes that as the Reformers may have the reputation for division, they actually worked much harder in the spirit of unity.  Nevertheless, the unfortunate result of separation from Rome was a splintering of the church into many denominations, which unfortunately continues to this day.  Can’t we all just get along?

There has been some cries for cross-denominational unity and ecumenicalism and yet there is still a backlash on the protestant side against anything ‘ecumenical.’ I have had personal experience with this in my own setting. I do need to show love and grace to other churches, I will happily serve alongside them to feed the hungry or help the homeless, but I cannot participate in a worship service with people to differ on salvation.

I perceived a shift in the author’s tone to be one of “us” who are for unity and “them” that are not.  The immediate question I have is “Yes, but what about those things that are negotiable? Like justification by faith? Substitutionary atonement?”  I mean…I agree Protestants disagree on the dumbest and smallest of things [worship music? carpet colors??] and this is sin and to our shame, but there are things that we just can’t go along with – not because we have convictions, but because the Word of God says so.  Wasn’t that the reason for the Reformation in the first place?

The author writes “Here is the sobering thought that must not be avoided: If the unity of the church is as important as the Bible says it is, aren’t we obligated to attempt to surmount all impediments to it’s achievement to the greatest degree possible?” [130]

To which I say a hearty and loud YES and AMEN…but they key is “…to the greatest degree possible.”  In that, it appears the author and I differ as to what is the “greatest degree” – although I completely concur that unity in the church is sinfully neglected.  Still there are boundaries, set in God’s Word.  We cannot unify if we are preaching a different gospel.  [Galatians 1:8-9] Differences in substitutionary atonement cannot be resolved with unity…what are we unifying? [His unfortunate recounting of a conversation between Piper and Pagitt on that subject for example, p. 175.] Can we communicate better, yes?  With more love? Yes, but the challenge is doing this while not softening core doctrines, and weakening the very church we are trying to unify.

I also want to be very clear – Luder does hold firm to that which is of first importance – “Believers today are justified, as were the Reformers, in separating from those who deny the gospel and refuse to place themselves under the authority of God’s Word.”  My only wish is that this note would have been sounded louder, more frequently, and more clearly.

Even still, I’m thankful for his clarity in this and for the work of this book, it is surely needed.  Let us press on in unity for glorious gospel of God in Jesus Christ.