So.  RC Sproul.  A towering giant of a theological beast.  One of those guys that I’ve listened to a little, but not a lot.  This year, he also passed from this life and into his eternal reward. 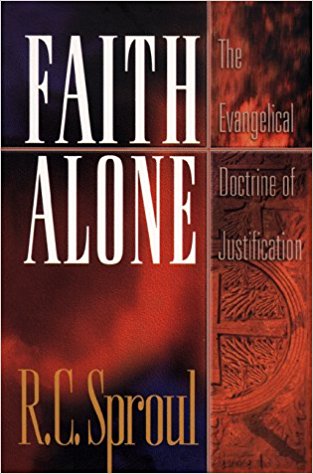 By all accounts he was a man who lived his life worthy of the gospel he was called to.  As far as ministry, he would be one to aspire to imitate.

So, I thought that I should definitely read a Sproul book this year, and I probably will read more than one.  I found this book on my “to be read” shelf, another in the “I have no idea where I got this from” folder, so I was excited to dive in.

Written in 1995 at the height of the “Evangelicals and Catholics Together”  [ECT] movement, Sproul comes out swinging to biblically answer the most important question ever – “How are we justified from our guilt before a holy God?”  This is the most important question and as Sproul writes “No doctrinal dispute has ever been contested more fiercely or with such long term consequences as the one over justification…non so central or so heated as justification.” [18] He sets a strong foundation of what the evangelical position is, grounded in the Protestant Reformation and of course, Scripture – and centered on faith.

The ECT document would agree that justification is by faith…but the rub, as the book’s title suggests, not faith “alone.” [Sola fide] Sproul points out that the ECT doesn’t make that clear enough, and additionally faith alone is in direction opposition to the Roman Catholic position. Rome would agree faith justifies, but not faith alone.

This is, not a trivial issue – it is foundational and systemic. [68] “Sola fide is important not merely because the church stands or falls on it.  It is important because on it we stand or fall.  The place where and the time when we will either stand or fall is at the judgment seat of God.” [70]

At the heart of justification lies the essence of righteousness and again, biblically faithful evangelicals should find themselves at odds with the theology of Rome.  “A person is justified when God declares that person just. The reason or the ground of that declaration differs radically between Roman Catholic and Reformed theology” [97] The Bible presents our justification [just read Romans…] is as a result of faith alone that imputes the righteousness of Christ to us.  Our righteousness isn’t infused to us from the church, or the sacraments – it comes from faith in Christ alone.

Again, get this wrong and we are guilty before a Holy God.  Eternity hangs in the balance, and the biblical gospel clearly shows the way.  Sproul does a masterful job of defending the gospel.

If you have ever wondered if Protestants and Catholic theology actually differs, it does – on the most important aspect possible.  This book is an excellent resource and a thorough introduction to the issues involved with justification.  Good read!

PS: If you aren’t familiar with RC and Ligonier Ministries, spend some time on their website.  They put out countless great resources.  [The Reformation Study Bible and Tabletalk Magazine to name a few…]